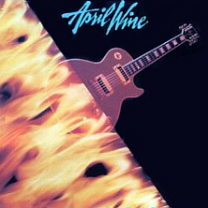 When April Wine broke up, Myles retained the right to use the name April Wine, and recorded an album in 1986. The record included songs by Myles as well as some by outside writers, and featured Brian Greenway on guitar, Daniel Barbe on keyboards, Jean Pellerin on bass and Marty Simon on drums.

The album was good, but it wasn’t quite the same.

Walking Through Fire did achieve success through two singles, Rock Myself To Sleep and a Goodwyn ballad titled Love Has Remembered Me.