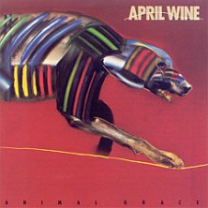 Animal Grace was the final album created by April Wine. Released in early 1984, much time and effort was put into the making of this record.

The distance between the band members had increased, and the end of April Wine was nearing. The group gathered together one last time for their final tour. Their final performances were spectacular, but the band never reconciled until the next decade.

They played their final show on a hot summer night in British Columbia, on the last day of July, 1984.

This album dedicated to Robbie Whalen.