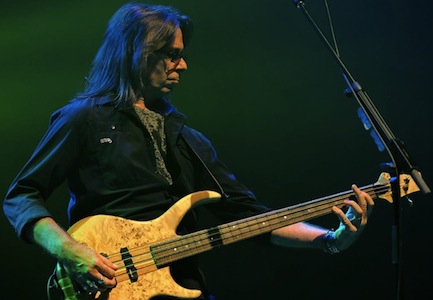 Richard grew up in Montreal and has been interested by music at a very young age. His musical career began in the 70’s, playing with several rock bands, while being very much influenced by the prog rock era and the whole British rock scene. You might have seen him touring Quebec and Ontario with several rock bands, Dogz, The Michael Breen band, in the Quebec blues/rock scene with Bob Walsh, Jimmy James, Jim Zeller and many others, or playing with Richard Desjardins in Pierre Falardeau’s movie Le party.

Active in the video games industry as a game designer, sound designer and audio post-production engineer in the early 2000, he later spent some time behind the scene, taking care of many technical aspects of major scale live music productions such as Gregory Charles, the Mondial Choral, Montreal International Jazz Festival and more. But Richard always kept performing live on stage, behind the bass, mainly with his Yes tribute act Close To The Edge who’s former lead singer was actually recruited by Yes in 2008 to replace Jon Anderson, or with the Premier Ciel présente Harmonium show.

In 2010 he collaborated to the album One Among The Living from Montreal’s cutting edge prog-rock band Mystery, and a couple of months later, Richard was totally honored and thrilled to accept April Wine’s invitation to join the band. His main influences on bass include Chris Squire, John Wetton, John Entwistle and John Paul Jones.