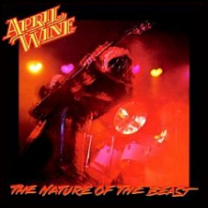 The group began to tour around Europe, leaving their mark in each city they visited. The album The Nature Of The Beast was in fact recorded in England, at Le Manoir Studios, chosen because producer Mike Stone felt that this was a location that would allow the band to focus.

Although the only track to reach the Top 20 on Billboard was the ballad Just Between You and Me, The Nature Of The Beast became April Wine’s greatest success ever, selling over a million copies.

This album remains one of the groups all time fan favorites, with many of the individual songs being released on subsequent compilations.