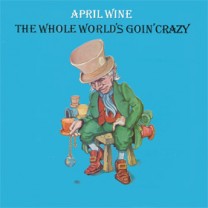 The Whole World’s Goin’ Crazy was the first Canadian album ever to achieve platinum advance orders, thanks to the phenomenal success of the previous LP.

The release of the album met with intense scrutiny from thousands of musical opinion-makers, all of whom were curious to see how the band would follow up the wildly successful Stand Back. Although the album sold only half as well as its predecessor, the band was subsequently offered a U.S. deal with London Records.