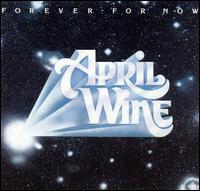 Following the release of “The Whole World’s Goin’ Crazy”, Myles Goodwyn decided he wanted to record a solo album, focusing on his early influences, such as Buddy Holly and the Everley Brothers.
However, April Wine could not afford to take such a long break at this time, and much of the solo material was converted into band material, resulting in the album “Forever For Now”.

The album featured all kinds of sounds, including country and western, latin, Caribbean, blues, easy listening, and rock.

The single You Won’t Dance With Me became a surprise hit, selling more copies than any other April Wine single ever had. Both the single and the album went platinum.