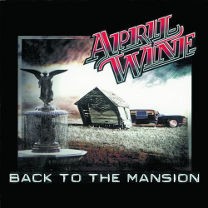 Formed in 1969 in Nova Scotia, April Wine relocated to Montreal in 1970 where they soon became one of Canada’s favorite rock bands. Spawning such international hits as “Sign Of The Gypsy Queen”, “Just Between You And Me”, “Like A Lover, Like A Song”, “Could Have Been A Lady” and “Roller”, which has been recently included on the soundtrack for the Columbia Pictures’ “Joe Dirt” starring David Spade, the group has continually earned the reputation of being the hardest working band in Canada. Fifteen studio albums, three live releases, numerous compilations, a boxed set, and thousands of concerts later, April Wine has become enormously popular in Canada, the United States and throughout the world.

Back To The Mansion is April Wine’s first release since 1994, and the debut for Goodwyn’s own Civilian Records. Produced by Myles Goodwyn and April Wine, the album features eleven new recordings, including the first single “Talk To Me”.

In 1977, April Wine was selected to pose as the headliner for a charity event with a group called the Cockroaches. Rock history is made when the Cockroaches turned out to be The Rolling Stones.

April Wine remains a big concert draw in both Canada and the United States. In July of 1992, April Wine played its first concert in 8 years to a sold out audience in Manitoba. For the balance of that summer they played to sold-out shows right across Canada. In San Antonio Texas, 20,000 people emerged to see them, and the band continues to have a strong U.S. fan base in the Central and Western states.

Their recordings are repeatedly being asked to appear in theatre released films and made for TV movies, the most recent being “Joe Dirt” featuring SNL alumni David Spade and Dennis Miller.

Their fan base has reached many people over three generations, including fellow golf fanatic Wayne Gretzky, and Canadian indie-rock stars Sloan, who covered “I Wouldn’t Want To Lose Your Love” for their “Party Rock” album.
01. Won’t Go There
02. Talk To Me
03. Paradise
04. Holiday
05. I’ll Give You That
06. Wish I Could Sing
07. Looking For A Place (We’ve Never Been)
08. Falling Down
09. In Your World
10. Won’t Walk That Road No More
11. I Am A Rock