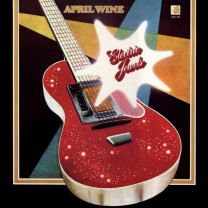 The recording of Electric Jewels was marked by significant changes within the band. As a result of creative differences, the Henman brothers left April Wine and were replaced by guitarist Gary Moffet and drummer Jerry Mercer.

The high-energy sound of this album reflected the band’s increasing emphasis on live performance.

Weeping Widow was something of an FM Radio favorite at the time of it’s release.