April Wine has a new drummer 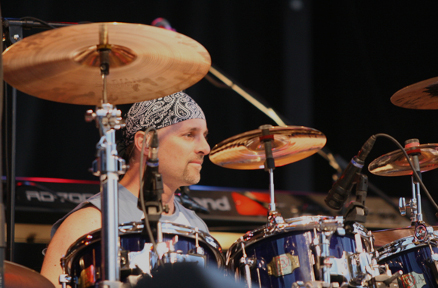 Myles Goodwyn, April Wine`s leader and front man announced a change in the personnel of his group yesterday. “I first heard Roy play about 3 years ago at a party Indie guitars put on in Cornwall, Ontario. The players in the band Sam Hill, were excellent, so when Blair got involved in several other projects I needed a drummer and I called a friend in Cornwall who knew the band and that led to me calling their drummer Roy Nichol. One thing led to the next and voila, he`s now drumming for Wine.”

Roy lives in Cornwall and has been playing drums since he was 15 years of age. He toured Western Canada from 1982 to 1986 in a well known rock band called “Steeler”. Since 1993 he’s been playing and singing with the group Sam Hill and for a while he was in a Journey tribute band where he came out front to be lead vocalist and frontman! This group toured in Canada and the United States.

“Roy is a rock solid, hard-hitting player that’s got great feel. Plus, he’s a fine singer. Roy’s also a studio engineer with a degree in recording and engineering and for me as a studio owner, this is a nice bonus.” Myles explained. Roy Nichol’s first gig is on April 1st in Fort McMurray, Alberta. Myles went on to say that this will be the first time that there are 4 singers in the band. “That alone is exciting.. the harmonies should be very good live.”