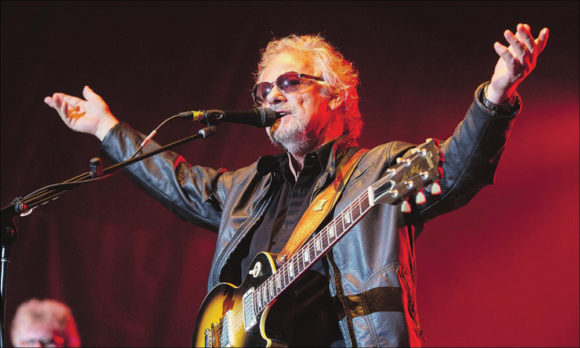 Myles Goodwyn is in good humour as he meanders down yet another hotel hallway. “I just left the airport, and you caught me heading to my room. But I can multi-task pretty good, so I can talk and walk at the same time,” he says with a chuckle.

From Vancouver to stops in the States to a brief visit back home to Montreal, life on the road, he says, is what it is and it’s usually pretty good. “We used to do about 50-60 shows a year, but I’ve cut back to about 28 or 30. When you love to perform, stopping is hard, but slowing down? That I can do,” he shares.

One place he’s looking forward to returning is here in this province.

Like? The people, the music, the culture, and being Screeched-in. “I’ve been Screeched-in twice, once by the city. With the sou-wester, kissing the cod and the Screech of course, but I have so many wonderful memories of there. I’ve been coming there forever it seems like. I love the people there and I’m always excited about visiting regardless of how many times I’ve visited in the past.”

The Just Between You and Me tour is something special, Goodwyn explains. Besides the fact that it will take him to many parts of the island, including St. John’s, Clarenville, Gander, Corner Brook and Stephenville between Oct. 24-29, this tour is unique for another reason; mainly because it’s beautifully simplistic and incredibly intimate by design.

Have a Taste for it

“It’s my music as I wrote it. I wrote about 85 to 90 per cent of all April Wine material. So, what happened was, I was invited by Bruce Guthro to partake in a song writer’s circle last year, so for a couple of days it was just me and an acoustic guitar in front of a large audience playing some songs of mine, and it went over so well that he invited me to do again and we have six sold out shows which I believe is a record of some sort. And I found I have a taste for it. So, I play and tell antidotes and stories of April Wine with just a guitar, and it’s very well received.”

Goodwyn is many things besides founding member of the veteran Canadian rock band April Wine. He’s a record producer, guitarist, lead vocalist, songwriter and painter. But as the longest serving and only original member of the iconic band, Goodwyn says this tour is particularly a must see. “When I knew this was happening, I thought of my dear friend since 1963, original founding member of April Wine, Jim Henman. He and I are still very close, and I said to him; you want to come? You were there, you were there at the very beginning. So the two of us strap on a couple of acoustic guitars and we go out and do our best to entertain.”

If you are a fan of Goodwyn, you know his music, and many songs, like Just Between You and Me, pull at the heart strings. Is he possibly the most romantic man on the planet? He laughs. “I certainly am romantic and it comes through the music and that’s good. Our ballads have done very well for April Wine and it’s nice to be able to complete a nice ballad and say what you have to say and be recognized for that.”

What about the future the band? “April Wine is continuing. I try and slow down in the winter, but I don’t see an end, just a slowing down. There’s still an appetite for the music, so we will keep at it.”