Jerry on drums/ Jim in the shadows. 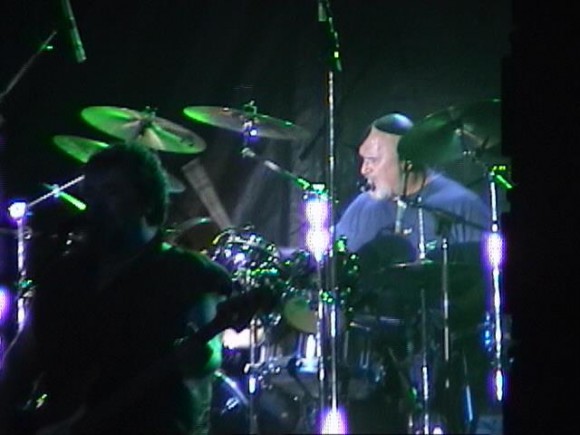 Jim Clench replaced Jim Henman on bass after our first album. Jim H. had decided the lifestyle was not for him. Smart guy that Jim. So I enlisted Clench. Since both bass players had the same first name, it made the transition amazingly simple. LOL

Neither player would ever be thought of as a technical player. Both were more basis players learning from the rudiments of basic acoustic guitar playing inspired by the british invasion and players like Sir Paul. And American folk music. In the case of Jim H. there was a blues influence as well.

Both had unique singing voices and the band continued to have several lead singers.

Songwriting was as important to them as it was with David and I, so rehearsals were always a real odd-ball mix of styles and often interesting. Especially when we were stoned. smile. Some daze!

Jerry never inspired to be a serious writer which was in his best interest I believe and let`s face, it didn`t hurt him none! haha But both bass players really needed and wanted a real drummer so when Jim C. and I got tired of not having a solid drummer I recruited….drum roll please…Jerry Mercer.

By the by, when Ritchie was replaced, David was not ask to leave the band but he wanted to go with his brother and he did. He was replaced by Gary Moffet.